Birds And People Lift Each Other Up

Home / Environment / Birds And People Lift Each Other Up
EnvironmentWildlife
April 10, 2017October 23, 2019watershedorg

On an overcast late-spring afternoon, a group of bird lovers from the Earth Conservation Corps are in a boat on Washington, D.C.’s Anacostia River, and point out an osprey circling overhead. “This is like their summer vacation spot and where they have their young,” says Bob Nixon, in the boat. “Then they spend most of their lives in the Amazon.”

It wasn’t so long ago that the ospreys – and other large birds of prey known as raptors – avoided this place. The Anacostia, often called Washington’s forgotten river, was too polluted to support wildlife. Nearly nine miles long, the river flows from Maryland into the Potomac, but became infamous in the second half of the 20th century as one of the most neglected, trash-choked waterways in the United States – a blighted river amid blighted neighborhoods. 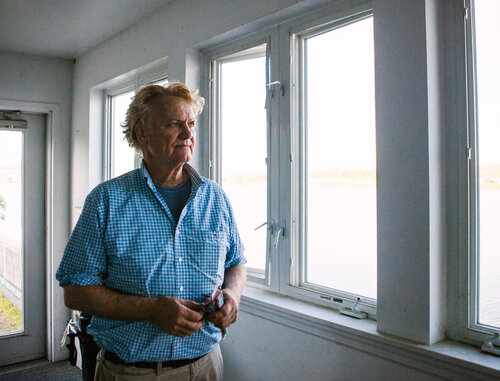 Bob Nixon, a filmmaker and conservationist, started the Earth Conservation Corps 25 years ago.

But in recent years, the Anacostia has seen a rebirth. Thanks to the efforts of the Earth Conservation Corps — which Nixon, a filmmaker and conservationist, started 25 years ago — there are now four osprey nests on the river’s Frederick Douglass Memorial Bridge. “We’ve turned this into a raptor hotel,” says Nixon.

There’s shad and bullhead catfish in the river for the ospreys to hunt. And from time to time, a bald eagle may even swoop in.

“What the eagles do, they watch the osprey hunt and once the osprey catch a fish, the eagles take it from them,” says ECC staffer Twan Woods. The eagles’ presence is due to the corps’ efforts as well: The group helped reintroduce the bird to Washington after decades of absence.

This website uses cookies to improve your experience while you navigate through the website. Out of these cookies, the cookies that are categorized as necessary are stored on your browser as they are essential for the working of basic functionalities of the website. We also use third-party cookies that help us analyze and understand how you use this website. These cookies will be stored in your browser only with your consent. You also have the option to opt-out of these cookies. But opting out of some of these cookies may have an effect on your browsing experience.
Necessary Always Enabled
Necessary cookies are absolutely essential for the website to function properly. This category only includes cookies that ensures basic functionalities and security features of the website. These cookies do not store any personal information.
Non-necessary
Any cookies that may not be particularly necessary for the website to function and is used specifically to collect user personal data via analytics, ads, other embedded contents are termed as non-necessary cookies. It is mandatory to procure user consent prior to running these cookies on your website.
SAVE & ACCEPT